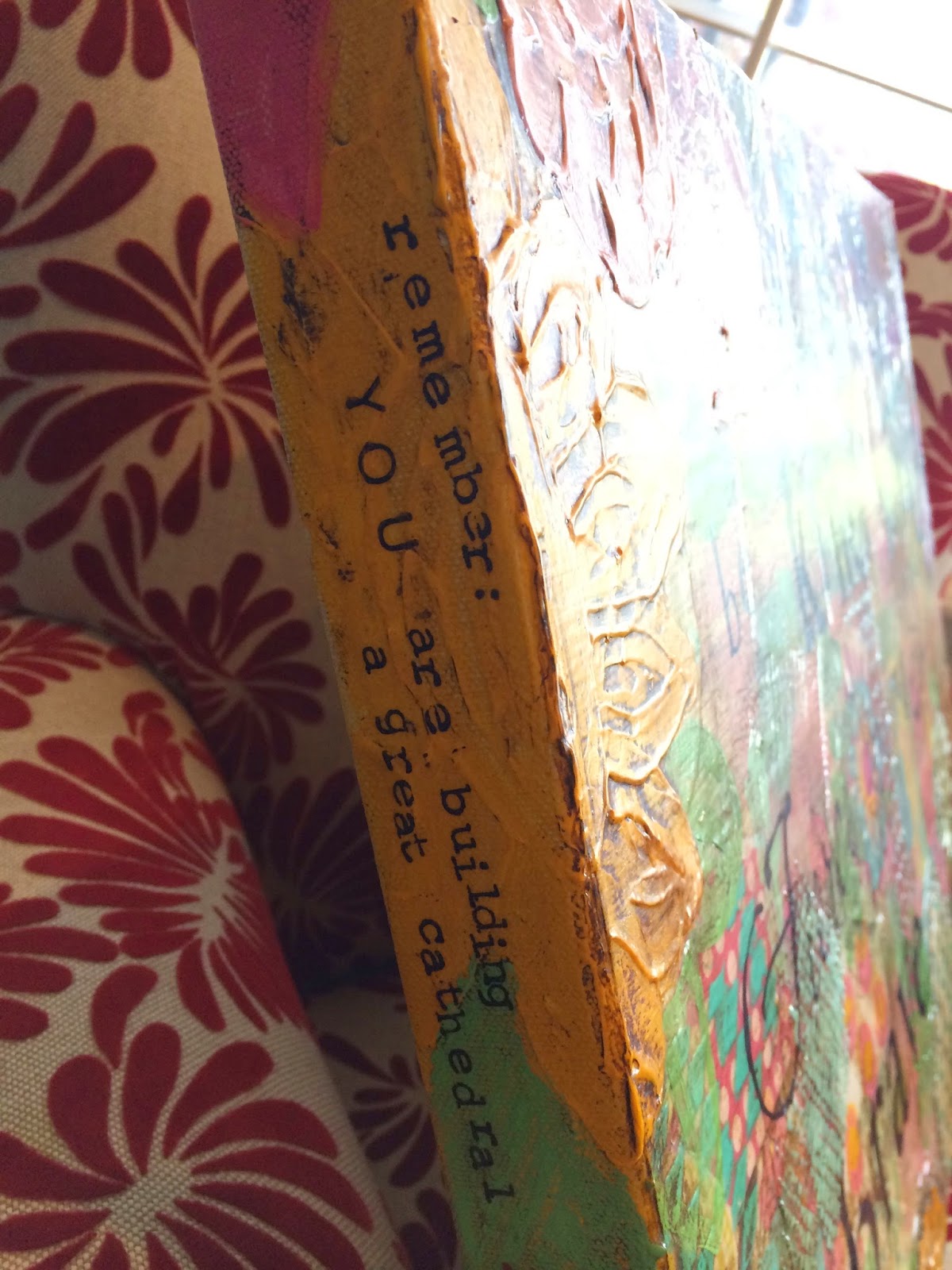 Tomorrow is my amazing sister’s birthday. I’ve been wanting to write about her for a while – and this week seemed like a fitting time.

Last August I had just started painting (or, more accurately, started daring to tell people that I was holed up in my basement playing with paint.) I told her that I was going to paint her something for her birthday -but she would get it late.  I wanted her opinion about what quote to add to it. I wanted it to be something that would make her happy every time she saw it. – So she figured out a great quote and I got to work.  But, I already knew what I wanted to put on it…. It wouldn’t really make sense for it to be front and center on the painting, I didn’t want her to have to explain it to everyone,  but I KNEW it needed to be in there somewhere. Maybe even hidden, so you had to look to find it… Maybe she would be the only one who knew it was there… but I wanted her to read it everyday….

So fast forward to November, my birthday. My birthday is on Veterans day, so it’s kindof a doozy each year. She knows it’s always very bittersweet so that morning my sweet sister brought over a beautiful necklace with a bird on it wrapped up with a copy of this story…..
“It all began to make sense, the blank stares, the lack of response, the way one of the kids will walk into the room while I’m on the phone and ask to be taken to the store.
Inside I’m thinking, ‘Can’t you see I’m on the phone?’ Obviously not; no one can see if I’m on the phone, or cooking, or sweeping the floor, or even standing on my head in the corner, because no one can see me at all.
I’m invisible. The invisible Mom. Some days I am only a pair of hands, nothing more: Can you fix this? Can you tie t his? Can you open this? Some days I’m not a pair of hands; I’m not even a human being. I’m a clock to ask, ‘What time is it?’ I’m a satellite guide to answer, ‘What number is the Disney Channel?’ I’m a car to order, ‘Right around 5:30, please.’
I was certain that these were the hands that once held books and the eyes that studied history and the mind that graduated summa cum laude – but now they had disappeared into the peanut butter, never to be seen again. She’s going, she’s going, she’s gone!
One night, a group of us were having dinner, celebrating the return of a friend from England .. Janice had just gotten back from a fabulous trip, and she was going on and on about the hotel she stayed in. I was sitting there, looking around at the others all put together so well. It was hard not to compare and feel sorry for myself. I was feeling pretty pathetic, when Janice turned to me with a beautifully wrapped package, and said, ‘I brought you this.’ It was a book on the great cathedrals of Europe .
I wasn’t exactly sure why she’d given it to me until I read her inscription: ‘To Charlotte ,

“with admiration for the greatness of what you are building when no one sees.”

In the days ahead I would read – no, devour – the book. And I would discover what would become for me, four life-changing truths, after which I could pattern my work: No one can say who built the great cathedrals we have no record of their names.
These builders gave their whole lives for a work they would never see finished. They made great sacrifices and expected no credit. The passion of their building was fueled by their faith that the eyes of God saw everything.
A legendary story in the book told of a rich man who came to visit the cathedral while it was being built, and he saw a workman carving a tiny bird on the inside of a beam. He was puzzled and asked the man, ‘Why are you spending so much time carving that bird into a beam that will be covered by the roof? No one will ever see it.’ And the workman replied, ‘Because God sees.’
I closed the book, feeling the missing piece fall into place. It was almost as if I heard God whispering to me, ‘I see you, Charlotte. I see the sacrifices you make everyday, even when no one around you does. No act of kindness you’ve done, no sequin you’ve sewn on, no cupcake you’ve baked, is too small for me to notice and smile over. You are building a great cathedral, but you can’t see right now what it will become.’
At times, my invisibility feels like an affliction But it is not a disease that is erasing my life. It is the cure for the disease of my own self-centeredness. It is the antidote to my strong, stubborn pride. I keep the right perspective when I see myself as a great builder. As one of the people who show up at a job that they will never see finished, to work on something that their name will never be on.
The writer of the book went so far a s to say that no cathedrals could ever be built in our lifetime because there are so few people willing to sacrifice to that degree.
When I really think about it, I don’t want my child to tell the friend he’s bringing home from college for Thanksgiving, ‘My Mom gets up at 4 in the morning and bakes homemade pies, and then she hand bastes a turkey for three hours and presses all the linens for the table.’ That would mean I’d built a shrine or a monument to myself. I just want him to want to come home. And then, if there is anything more to say to his friend, to add, ‘You’re gonna love it there.’
As mothers, we are building great cathedrals. We cannot be seen if we’re doing it right. And one day, it is very possible that the world will marvel, not only at what we have built, but at the beauty that has been added to the world by the sacrifices of invisible women.”
And at the bottom of the story she had written
“God sees. and Brad sees.
And it was the most perfect gift.
I don’t identify with every single line of the story, and Kalani and I probably have differences in exactly what we relate to about it. But I always love the reminder that “God sees”
Every trial we have. Every tear we have cried. Every worry. Every fear.  Every single thing we have felt. I know my Savior sees this. And not only does He see, but He has the power to lift me up and carry me and heal the broken parts of me – and of all of us.
When I began to read the story she had given me I started to cry – because THAT was the story that I had been thinking of when I started Kalani’s painting. And that phrase –
with admiration for the greatness
of what you are building when no one sees.
had always reminded me of my sweet, supermom, super everything sister.
It was the phrase that I had already started to sneak into her painting. 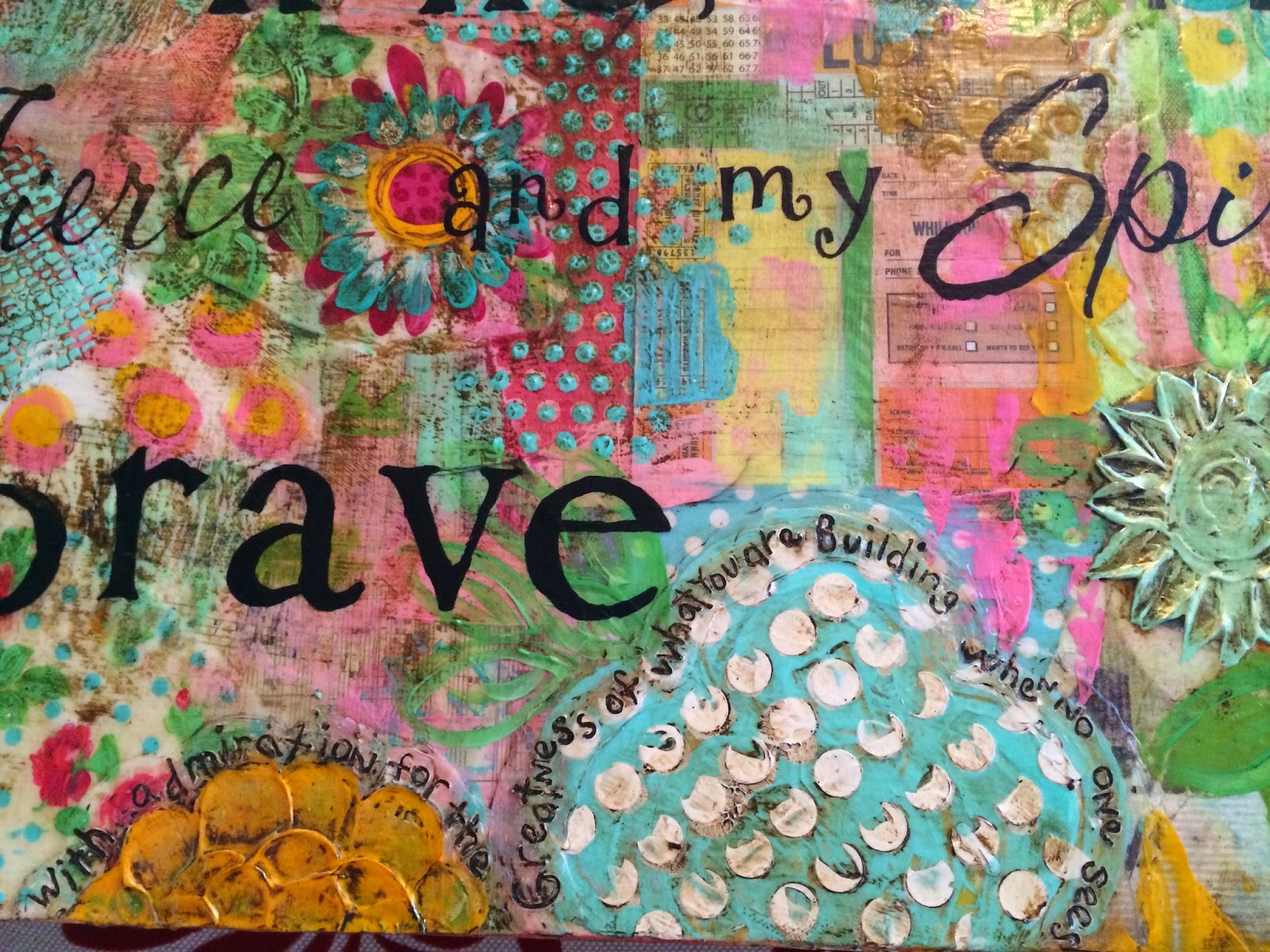 See, this sweet sister of mine is an unusually amazing mother. She is actually an unusually amazing everything. She somehow manages to do everything and to do it well. I know that she works so hard at all she does, but  when someone notices something amazing she did she just shrugs it off and acts like everyone does that.
She is wise beyond her years and I am so lucky I get her as a sister and  friend. 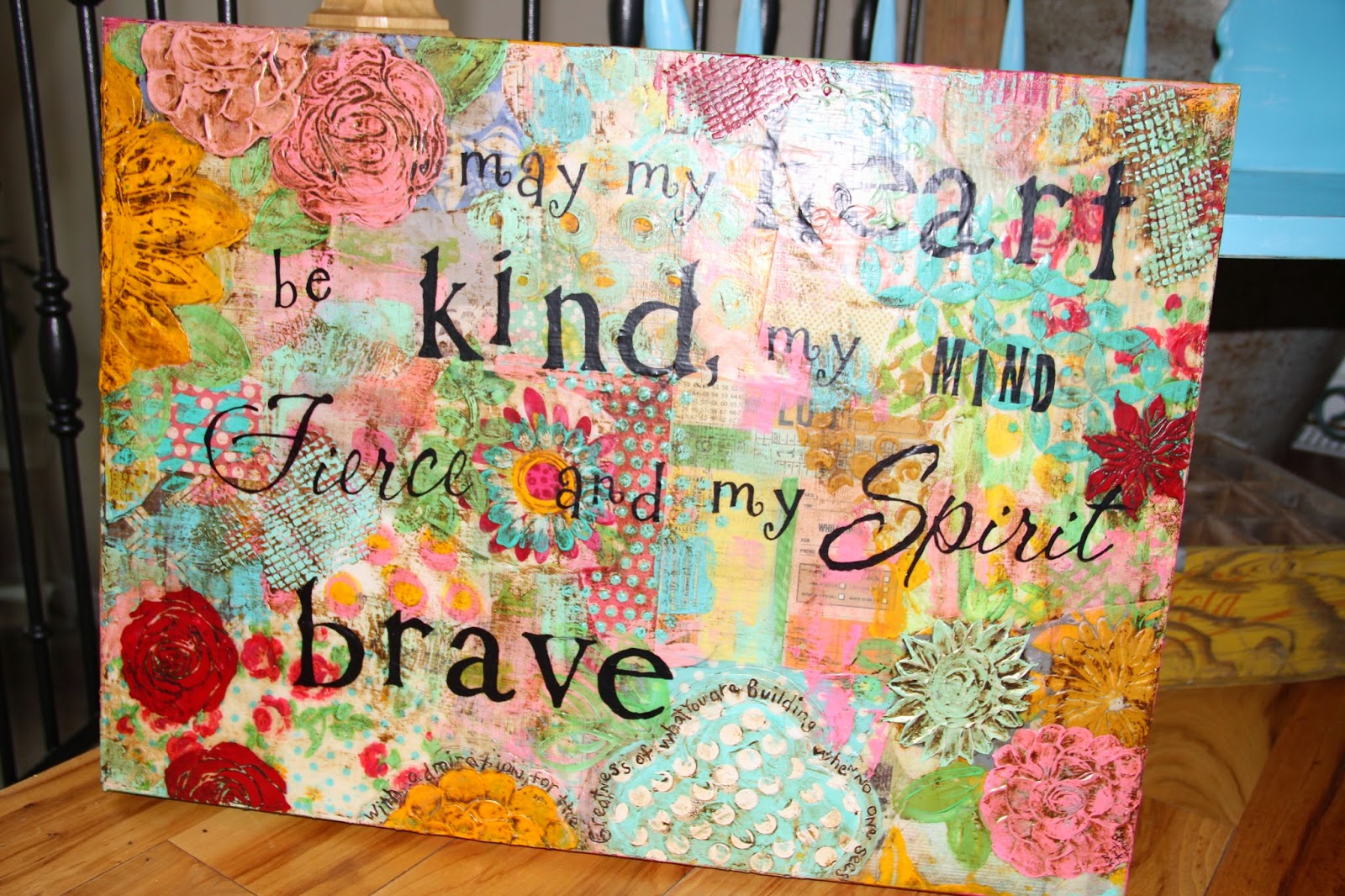 I dropped this off to her on Mother’s Day this year.
(yes, it took me nine months…I’m not the fastest painter;)
Happy Birthday Kalani
(does it mean I’m a really bad sister if I don’t know how old you are??  – I would just go with 29…)
I love you. 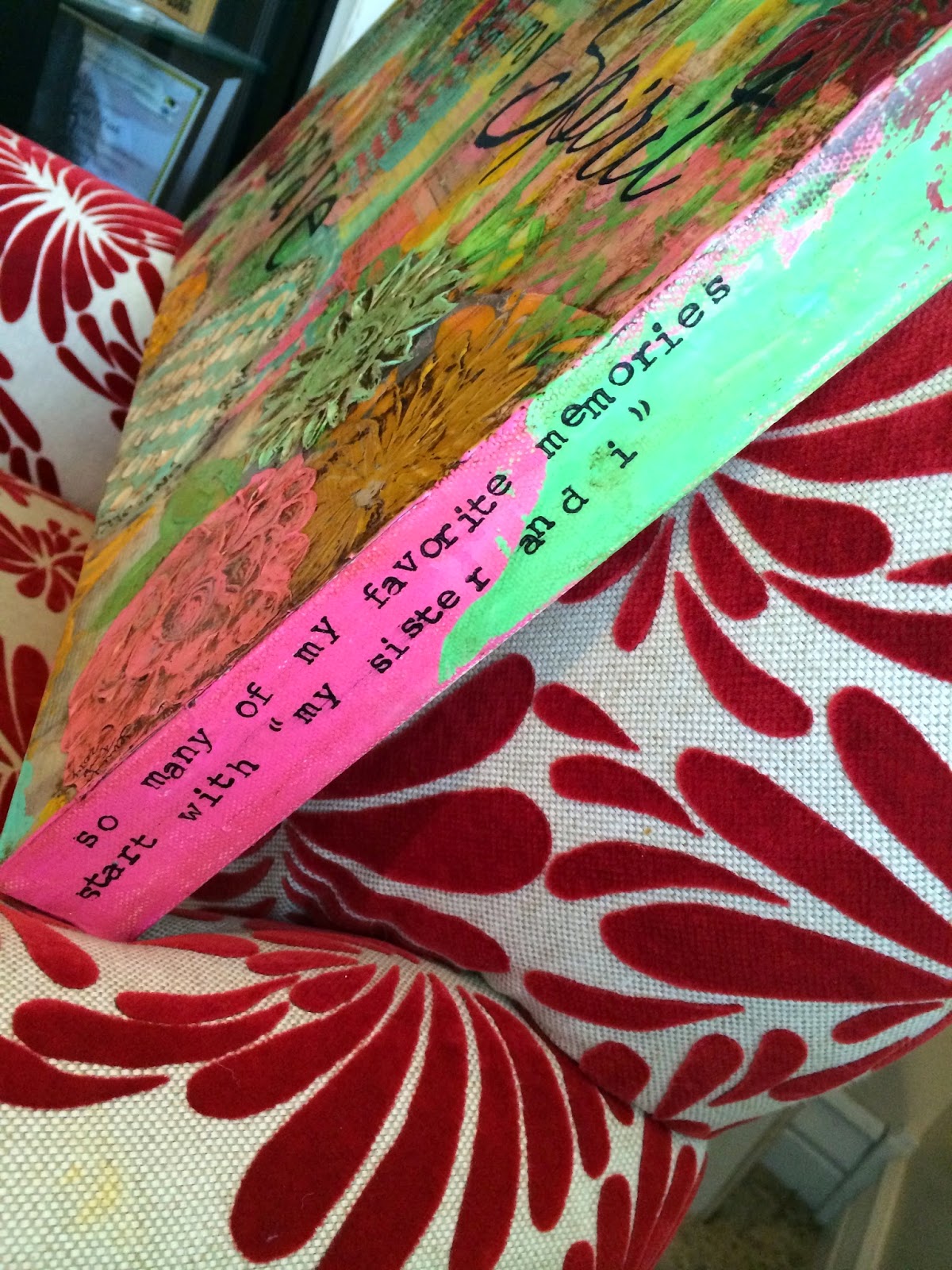 1 thought on “Building a Cathedral”